One of the most difficult aspects of Christianity for me to embrace and practice has been the whole evangelism thing. I’ve just never been comfortable with it.

And as I talk with pastors and Christian leaders around the country (especially younger ones), I hear the same story. Evangelism just doesn’t feel natural to a lot of us.

It’s like evangelism is the awkward guy at the party who can’t follow the conversation and always talks a little too loudly. It’s fine, he’s nice enough, but you just don’t know how to relate to him.

So what’s the deal with that? Are we “ashamed of the gospel” and need to get over ourselves? Are we trying too hard to be “relevant” or something?

Maybe, but I think something deeper is going on here. 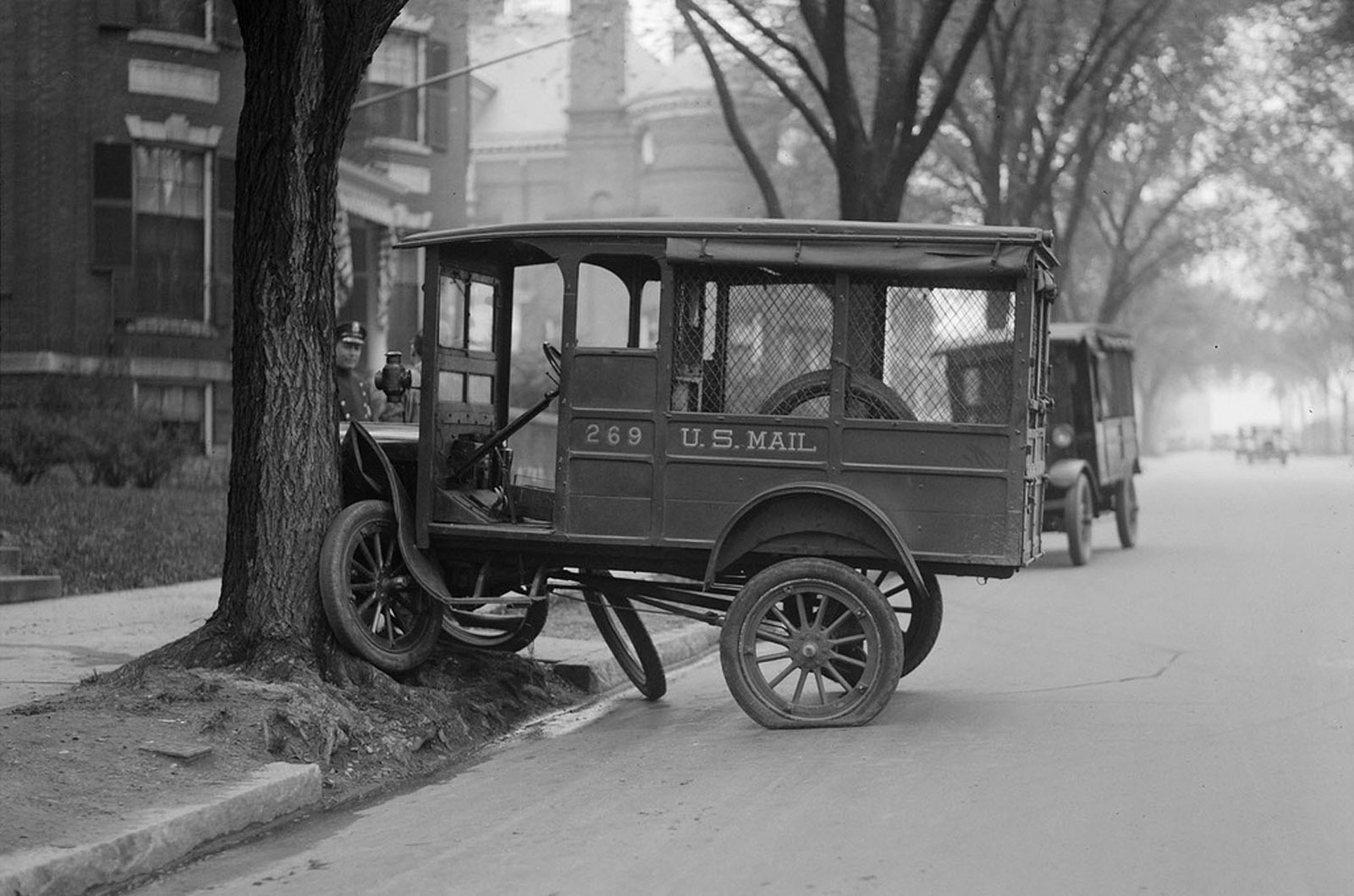 Here’s what I mean. My hesitations with evangelism stem from seeing it done badly.

Many evangelism techniques from a generation ago seem to be focused on how to confront strangers with the “truth,” win an argument, and thus win them to Jesus.

After all, if you were serious about your faith, if you really loved Jesus, you’d care enough about people’s ultimate destiny to give them an opportunity to get saved, right?

Then you were equipped to answer their objections, “proving” that the Bible was true! Because of your ability to intellectually destroy them, they’d be forced into falling on their knees and confessing that Jesus is Lord.

If you were smart and relentless and committed enough, you could argue people straight into the kingdom, saving their souls!

But I wasn’t buying it. To me, this kind of thing looked like ethically questionable bait-and-switch tactics, coercive conversation outlines, and hard sell techniques filled with fear, guilt, and shame. Nothing I wanted to be involved in.

Plus, (spoiler alert), it doesn’t work! Even if they “get in” because of the fear, guilt, and shame, they’re not actually getting saved from anything. They’re just signing up for more bondage! Yuck!

I have to confess an intense double embarrassment regarding these kinds of evangelistic strategies. On the one hand, I was embarrassed to use these techniques on others, and also felt embarrassed when others occasionally used them on me.

One time when I was walking through an airport someone handed me a tract and asked me if I knew if I was going to heaven.

I sort of answered awkwardly that I was already a Christian, but that wasn’t part of his conversation script, so he kept trying to bring me back to how I knew I was going to heaven…

Ugh! At that point I just felt slimed and walked past him.

Isn’t that interesting? I was “on his team,” so to speak, but I felt like a pawn in his game. There was nothing authentic about the conversation. He wasn’t interested in me, just interested in getting another notch in his evangelism belt.

I just didn’t have the stomach to do that to people. It didn’t feel right. It wasn’t effective, but I assumed my attitude was the problem, and I was ashamed that I wasn’t more passionate about “sharing my faith.”

I responded to these confrontational evangelism techniques in the way that many others do—I backed off and simply tried to connect with people outside the church. I tried to get to know them as people, not prospects.

Which felt like such a relief! I figured this was how people would get to know Jesus and come to faith, through simple friendships where we were connected in our similarities.

I was practicing a kind of “sneaky evangelism” where I hoped that by being loose acquaintances with people, they would eventually just sort of become Christians by osmosis.

But even though it felt better, it seemed to bear about as much fruit as the coercive method (almost none).

As I’d get to know people, they’d find out I was a Christian, but that didn’t seem to mean much.

They’d talk vaguely about going to church as a kid, or even how they go to church occasionally now. Me being a Christian was basically just an interesting fact about me. Like someone with a nose ring or a passion for ballroom dancing or a Haitian ancestry.

My faith was a curiosity at best. It didn’t explain anything remarkable about me. It was just an interesting religious preference, like some people enjoy meditation and others go to church. To each their own.

So if coercive evangelism doesn’t work, and neither does “osmosis evangelism,” where does that leave us?

Here’s the thing: whenever you find yourself having only two unsatisfying options, there’s probably another dimension to the problem you’re not thinking about.

So instead of thinking about these 2 ways we all fail at evangelism as opposite ends of a spectrum, think about them as emphasizing two necessary elements in an evangelism strategy that works.

We need connection to the people we are trying to reach, as well as distinction from them. Like this: 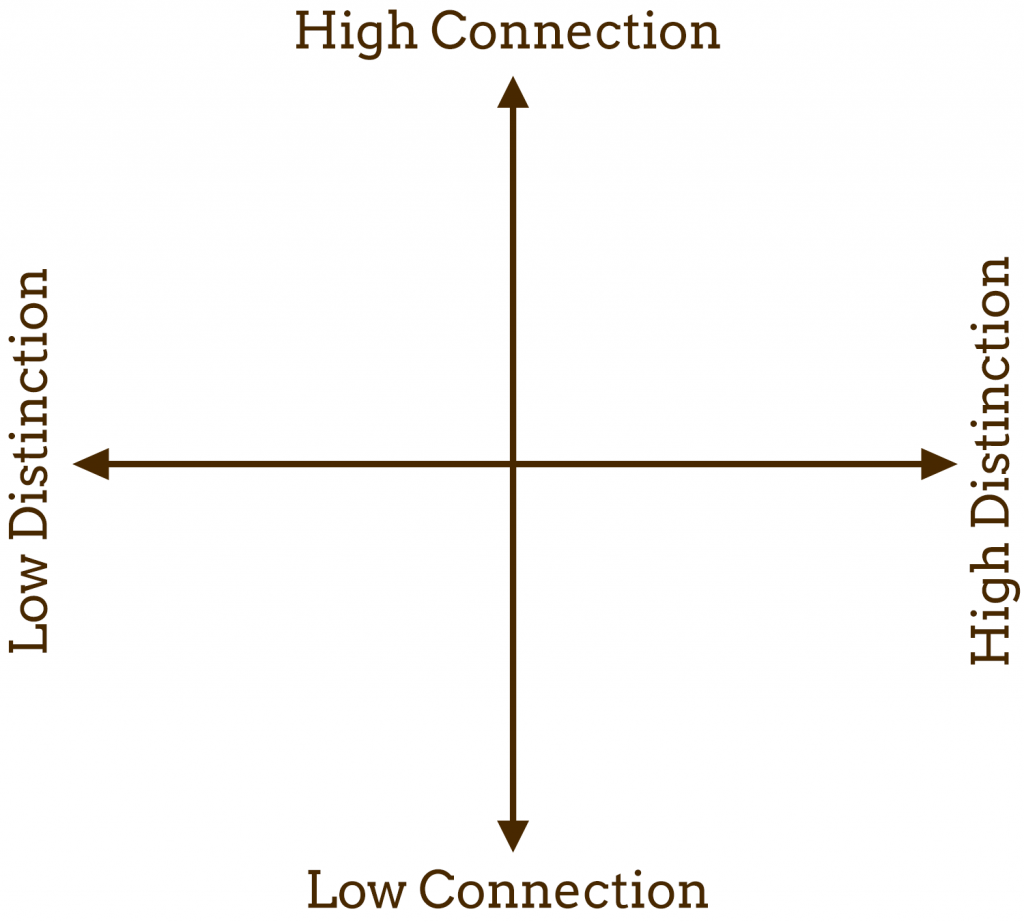 Remember the first way we fail at evangelism? We try to manipulate and coerce people into the kingdom. We accost random strangers and ask them about their eternal destiny and try to win an argument.

These kinds of evangelism techniques are what we might call high-distinction tactics. Right out of the gate, I emphasize how I am different from you, and how you can become like me.

Of course the problem with this approach is that nobody cares! They can see you’re different, but the way you’re different is that you’re an insensitive busybody who doesn’t actually care about me.

It doesn’t matter how good your argument is! You have no relational connection with the person you’re speaking with, so they don’t really care. This is coercive evangelism: high-distinction, but low connection. 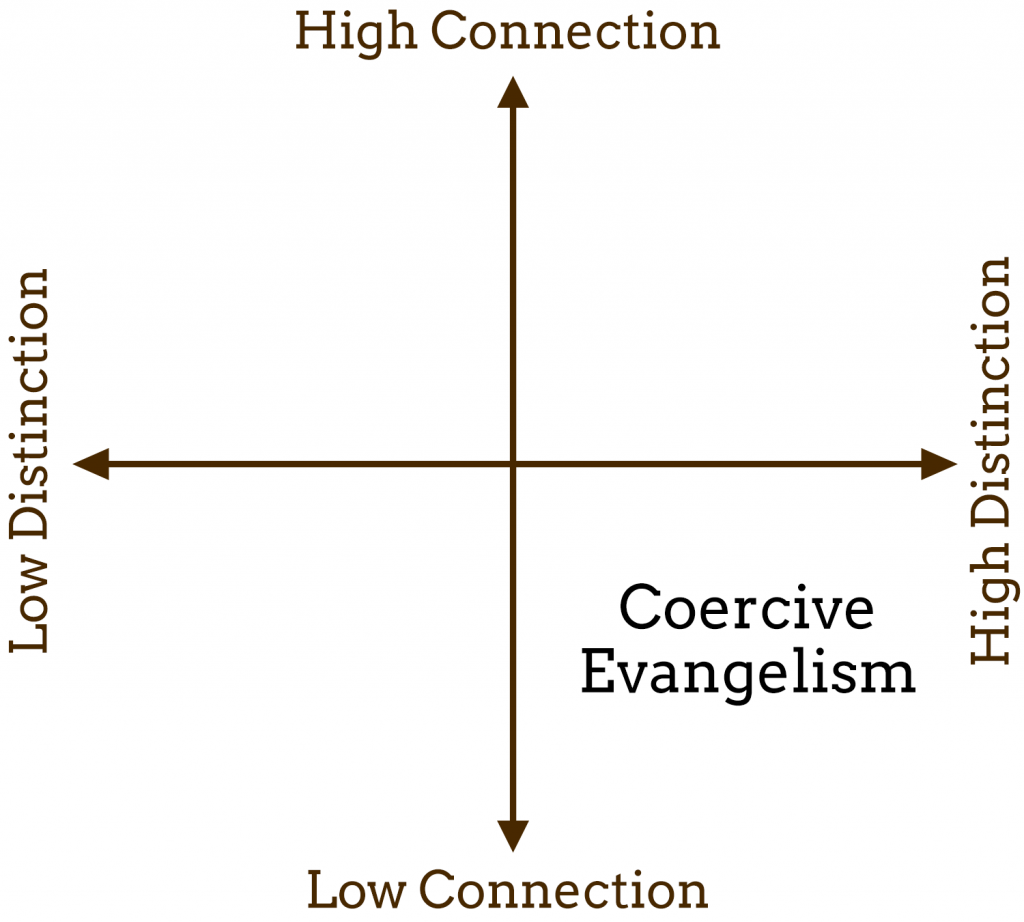 But of course the other way most of us fail at evangelism is when we swing to the other extreme: high connection, but low distinction.

This is when we turn down the distinction and turn up the connection. We simply become “friends” with people, hoping they’ll become Christians by osmosis. At the end of the day, you can’t call anyone to anything, because there’s nothing really distinct about you.

“Come join us, because we’re exactly like you!” is not a compelling vision, nor does it even make sense! You can’t join something if you already belong. If I’m no different than you there’s nowhere for you to move. This is why osmosis evangelism doesn’t work. 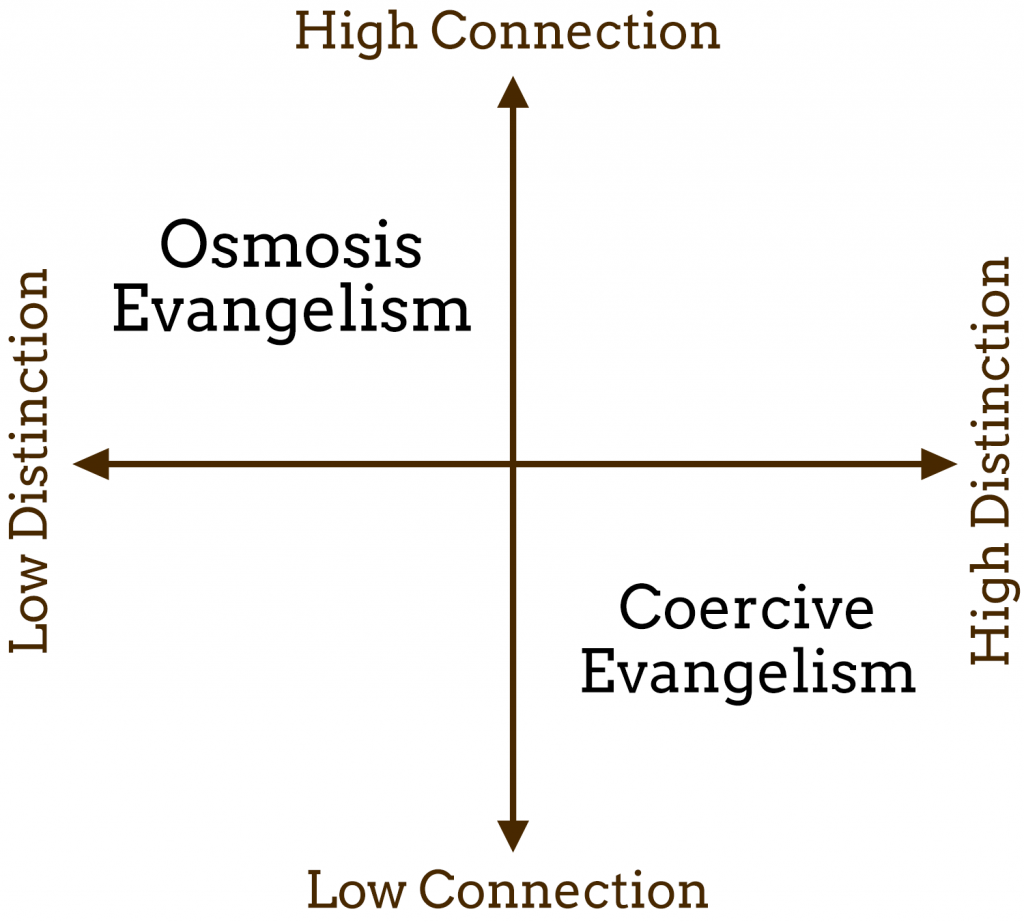 This is the false dichotomy we get stuck in…

So what’s the third way? What’s evangelism with high connection and high distinction? What the upper-right quadrant? It’s incarnational evangelism. 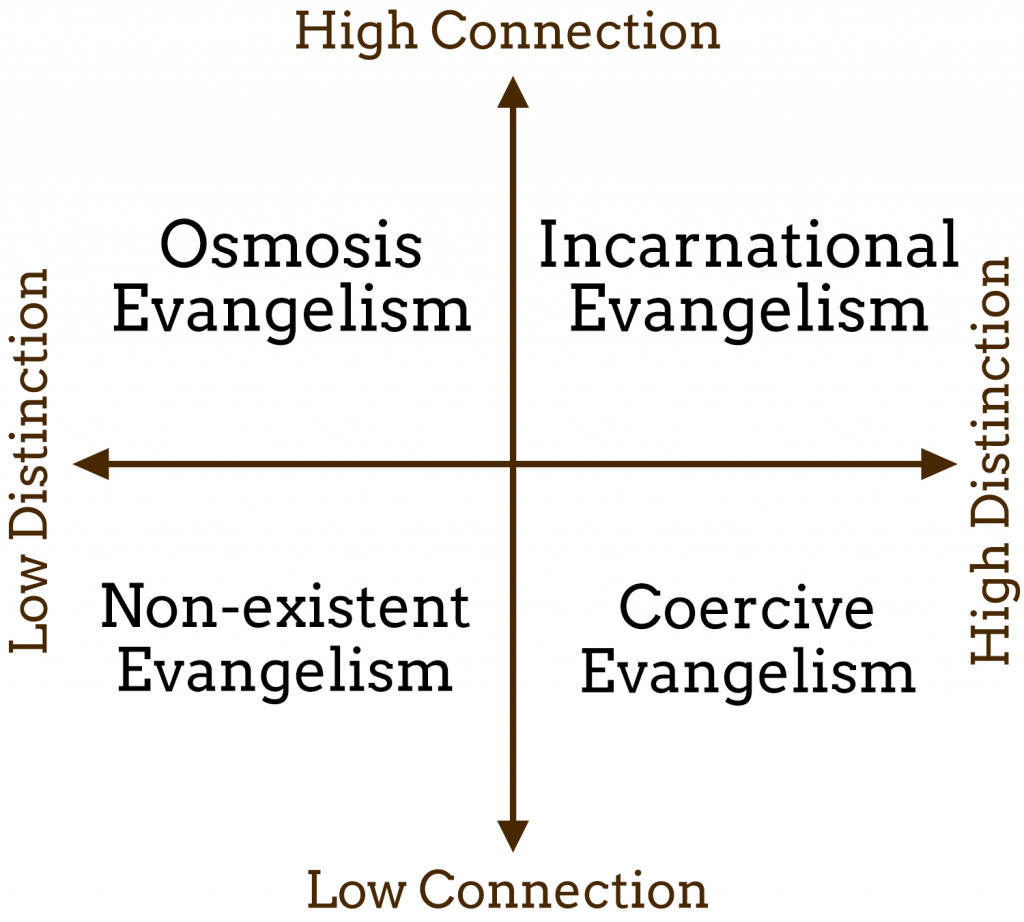 This is evangelism in the way of Jesus, because Jesus, as the incarnation, is the perfect embodiment of connection AND distinction at the same time. Jesus is 100% human (connection), and 100% God (distinction).

He embodies connection by fully identifying with us in becoming human. He also embodies distinction from us in remaining fully divine and calling us toward divine life.

One of the most remarkable things about Jesus’ ministry was that “sinners” wanted to be with him, even though he was so clearly not like them.

Jesus reached out to connect with people, and he called them into the thing that was distinct about him: life in the kingdom of God.

Now, there’s a lot more to say about how we are distinct and how we connect (seriously! So much to say!), but maybe the paradigm shift is enough for now.

(Plus, learning to actually practice things like incarnational evangelism take time, training, and relationship, which is why we take 10 months to do this kind of thing in our coaching cohorts!)

We’d love to hear from you. Does this resonate? What observations or reflections do you have? Does it bring up any questions for you? Leave a comment below to join the conversation!